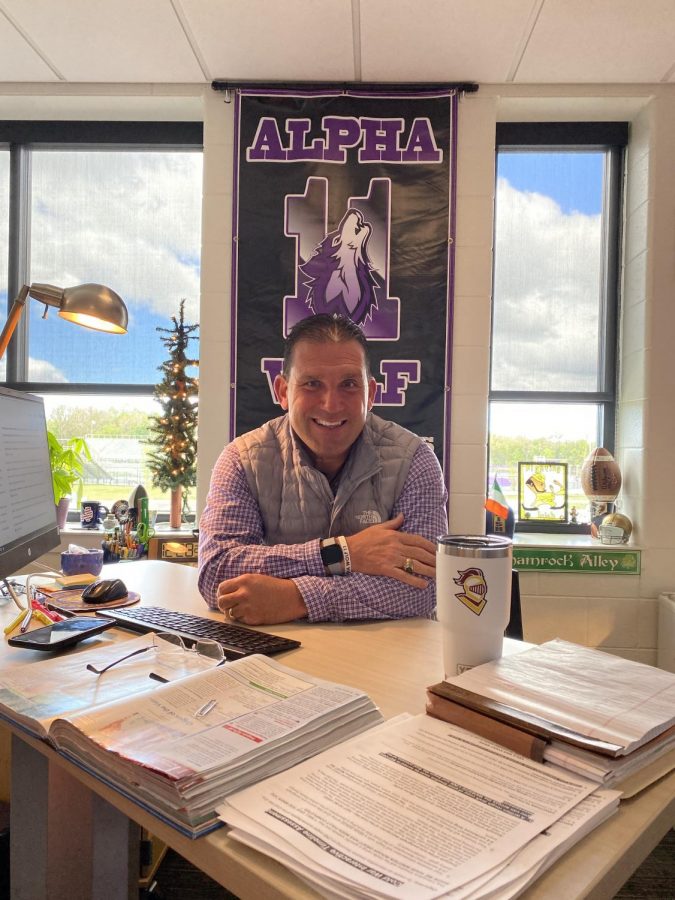 Mr. Doyle is looking forward to the Alpha Wolf ceremonies.

It’s that time of the year again where students vote to have our next six Alpha Wolf students. Where some of the amazing students at Wyoming High School are celebrated and awarded for representing Alpha Wolf characteristics everyday. Although, this year with COVID, it will have a bit of a twist. It won’t run the same way it has in past years. Especially since we did not get to choose our alpha wolves last semester or the second semester of last year. This has led to us being able to choose up to 4 new Alpha Wolves per grade for this upcoming Friday! Mr. Doyle is hoping for the alpha wolf schedule to be back to normal by next year. So for now, we are asking all students to attend school on May 14th so that we can celebrate our classmates that were chosen by the student body! We are very lucky to finally be allowed to have our alpha wolf assembly back so let’s make the most of it!
Since COVID is now part of our lives we are not allowed to congregate more than 350 people in the gym. In order to solve this problem, the Alpha Wolf celebration will be split into three different assemblies. The assemblies will all run by grade and sophomores will start the day by having theirs first. Sophomores will be having their celebration at 10 am and will be taking lunch right after their assembly. As soon as the sophomores are done with their assembly and are in lunch, Juniors will be up next. Juniors will be having their assembly at 11:15 am. Once their assembly is finished they will head to lunch and seniors will finish off the last and final assembly at 12:30. As of now, lunch for the seniors will not be typical cafeteria food. We will be having a cookout outside in which only seniors will be allowed to attend! This cookout will be happening at the same time as the Juniors assembly.
Since this will be the last Alpha wolf for our seniors they will be doing a few more extra activities throughout the assembly, making it the longest assembly of the three that day. Meanwhile, the seniors are in the gym, they will also be announcing the senior awards as well as a teacher alpha wolf.
Mr. Doyle will be in charge of all of the setup. He will be directing the few student volunteers that will be there to help out. There will also be staff from the district coming to decorate to make sure things look nice for our assembly.
“It will not be as elaborate as it has been in years past because of COVID,” said Mr.Doyle. This means we will unfortunately have no choir students or band students performing. They will not be part of the assembly this year like they have been in the past due to social distancing regulations and the amount of people allowed in the gymnasium at once. Since we will not be having our musical programs allowed in the gym they will be using the sound system in order to play background music.
Despite all of the many things that were cut out in this year’s alpha wolf assembly, there is a lot to look forward to. Mr. Doyle wants students to be able to have this assembly without breaking CDC guidelines. Meaning, there won’t be many members of the community coming in either. Although there is one special speaker to look forward to seeing. The special speaker will be, Dr. Pink! The president of Grand Rapids Community College. As always he will be delivering a very great and important message to our school. He will be speaking in all three assemblies.
Another plus would be that the assembly will be televised. So if you’re a sophomore you can watch juniors and seniors and vice versa. It will be available to watch on Chromebooks as well as all the clever touches that are in each classroom. If you are a parent that wanted to attend but can’t because of CDC guidelines, you can watch from home. It isn’t just exclusive for parents or online students but the WKTV broadcasting will be available for those in the community who would like to watch our alpha wolf ceremonies as well. Mr. Doyle planned this whole day out just for us. He hopes everyone has fun and enjoys what he has worked so hard to make happen!